On Sunday 15 September we headed to Dorney Lake to take part in the Season Finale Olympic Distance Triathlon hosted by Human Race Events (gifted entry). This year my goal was to try my first triathlon. In July I took on London Tri and I loved it, I knew as soon as it was over I wanted to do another and when the opportunity to do it all over again arose I was EXCITED. Dorney Lake offered the perfect end of season race with an iconic venue and flat course. 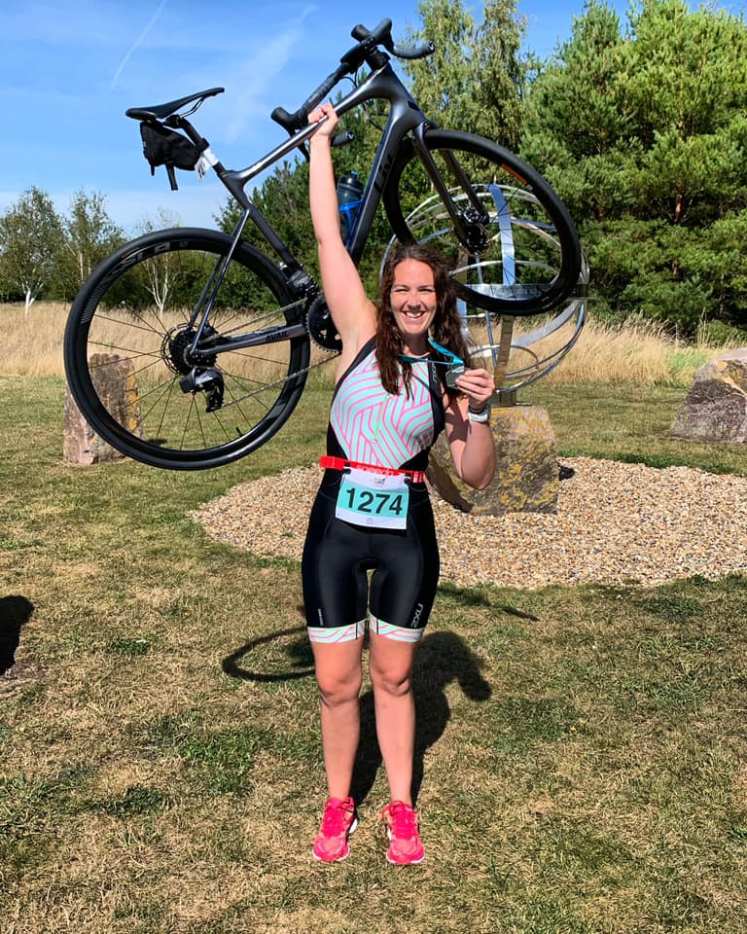 The day was wonderfully sunny, a tad chilly to begin with but temperatures were set to hit the mid 20s later. The 5am start felt a little brutal but the journey was easy with Dorney Lake being just off the M4. Car parking at the event is plentiful and free, plus there were some very helpful marshals assisting drivers with where to go.

Once we had parked and managed to get the bikes off the roof we headed to collect our numbers. It’s about a 15-20 minute walk to the start, but you’re warned of this well in advance, so leave yourself enough time. I’m always a little apprehensive of collecting race numbers on the morning of the race, especially when I have so much kit with me. I’ve heard some horror stories of people missing race starts due to extensive queues, however when we arrived the queue was minimal, the staff were working efficiently through everyone and it all seemed to run smoothly. We then headed to transition ready to rack our bikes and await the race briefing.

Bike racked, kit laid out and wetsuit on, we were ready to begin. We had decided to go in the mates wave which was the first wave of the day and a mixed gender wave meaning my boyfriend and I could race together (the other Olympic waves were all male and all female). As the briefing finished and we headed into the water I didn’t feel anxious about the mass start. Everyone was well spaced out and the wave was small so I didn’t feel worried about being hit or someone swimming over me.

The claxon went and we were off! I really enjoyed the swim, the water was so clear and a very welcome change from the murky dock we usually swim in. The swim was two laps and didn’t feel crowded at all, even when the faster swimmers from the wave behind ours began to catch us up on the second lap I still felt like I had plenty of space. I was chasing the time I set at London Tri, but coming out of the water I was already two minutes behind. My watch was telling me I had covered 1.65km which if true meant I had just achieved a somewhat unofficial and unexpected PB over the mile distance. I headed into transition, actually managed to get my wetsuit off by myself this time and got a speedy change onto the bike.

I had never noticed the breeze until I got on the bike and was met with a pretty strong headwind down one side of the course. It made things a lot tougher, but game on I’m always up for a challenge. The bike segment consisted of 8 loops of the rowing Lake and I really enjoyed the course. I thought the loops would have gotten congested but the waves had been spaced out enough that it never felt busy. I felt I had the space to race my own race. I can sometimes be quite a nervous cyclist especially when it comes to clipping in and having others around me. I found the course was a brilliant confidence giving route. It was fairly flat, the surface was great and the laps meant you got to know the route so could just focus on putting in the work and not worrying about unexpected pot holes, pedestrians or sudden bends. I enjoyed aiming for consistent times each lap and pushing harder on the last two. I felt braver and stronger every single lap. I wasn’t making up the time I needed for my sub 3 goal though, and managed to clock up 44.46km in 1:33:57.

Back into transition and I got a bit lost looking for the run out. We had had it clearly explained in the race briefing but by this point my brain just wasn’t working and transition was quite busy with people arriving for waves later in the day. Luckily one of the helpers spotted me looking a bit lost and started frantically pointing where to go, and then it was onto the run and time to dig deep.

The run consisted of four laps along the rowing lake with a water station at the start of each lap. It honestly was probably the toughest 10k I’ve ever ran. By now the temperature had reached 26 degrees and we were running in the midday sun, with zero shade. It really was just a case of putting one foot in front of each other. The two guys on the water station at the start of each lap were wonderful. They were so encouraging to every single runner, offering kind words of encouragement and putting cups of water into our hands. I battled through, but by the time I got to the third lap I had begun to feel quite sick, I really wanted this to be over! The last 600m felt the longest ever, I tried to draw energy from the spectators and volunteers who lined the last 300m to the finish. And then it was done- triathlon number two in the books and feeling strong until the final few minutes. 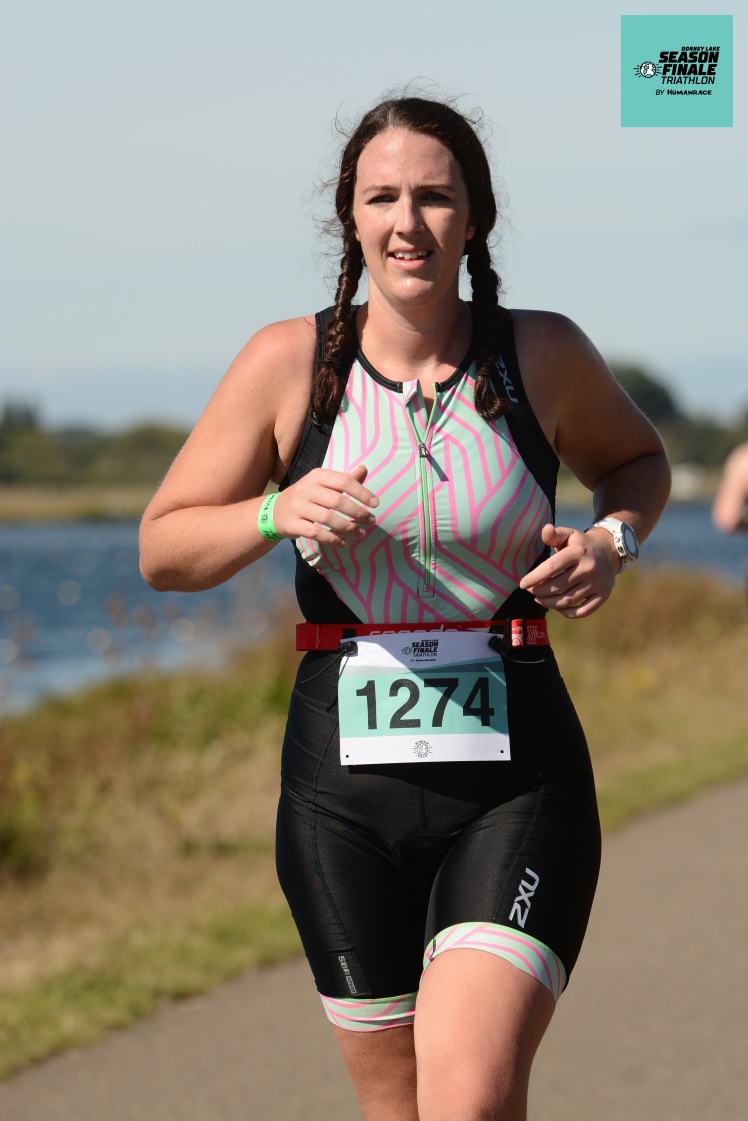 I really enjoyed being out of London and competing in a different location. Whilst we participated in the Olympic distance triathlon there was also a duathlon, a sprint distance, a relay and the cutest ever scootathlon for the kids.

To be improved/ aware of:

Thank you Human Race Events for my place! All thoughts are my own and not influenced in any way. Photos purchased from AWOL Adventure photography the official event photographer. If you have any questions pop them below.

Things were tough at the end……