So my first triathlon done and dusted. And yes, I’ve truly been bitten by the bug- the next one is already booked! I love swimming, I love cycling and I love running, so put these together and that’s a perfect combination for me. It all began back in November 2018 when the chance to participate in London Tri arose. I had been debating trying Tri for a while now and the offer of a place encouraged me to bite the bullet and just go for it, plus London Tri is only 8 minutes from our flat, we regularly swim in the dock and I run the parkrun round the Excel so what better way to ease ourselves in. Then my crazy attitude kicked in and before I knew it I had signed up to the full Olympic Distance.

The training and build up went well. I already had a good level of running fitness so it was mainly about improving my swim and bike times/technique and getting used to doing one thing after another. I started in January where I mixed cycling and swimming into my training for Manchester marathon. I did two local duathlons at sprint and super sprint distance in February and March and then once Manchester was over I really started ramping up the cycling miles. What came as a shock to me was just how much I enjoyed the swimming aspect. I trained in both the pool and in open water and I loved just switching off and paddling my way through the water. Before I knew it race weekend had arrived!

London Triathlon is run over two days, Saturday and Sunday. The distances offered are the same, but the bike course differs. We opted for Sunday as it offers the chance to ride into Westminster on closed roads- something which is a rare treat in London. The Saturday it POURED down and we really felt for everyone competing. Once the rain cleared slightly we took our bikes to the Excel (where the race starts/ends and all transitions happen). You can bring your bike the day before to rack it ready for your race, the organisers operate a strict security policy of people entering in and out of the transition zone and you bike is as secure as possible. We chose to use this overnight option as it meant we could just get up and leave the house hassle free on race morning. Once we had left our bikes we watched some of the finishers crossing the line. Everything seemed very well organised and the helpers were lovely. Having seen the event, the nerves were well and truly kicking in. I love trying new things and having different experiences, but that doesn’t mean I escape the pre event nerves. An early night was definitely much needed.

Race morning arrived and to my relief the rain had stopped. We left the house bright and early as I was in a slightly earlier wave than my boyfriend and you needed to attend a swim safety briefing. If you’re doing anything that involves more than running, give yourself way more time than you need. I’m so used to rocking up quite last minute to running races, however for everything else I give myself much more time than I think I need as somehow lying your kit out, making sure you have everything and getting your wetsuit on takes more time than you imagine.

Soon my wave was called and I headed to the safety briefing before getting in the water. I was so disappointed that Guy and I had ended up in separate waves. We had put the same estimated finish time, we signed up together and we have very similar surnames so I’m just not sure what happened. Standing alone in the start pen was possibly the most nervous I’ve ever been before a race. My legs were shaking. I hung about at the back and was soon greeted by a friendly smile and a hug from the lady next to me who was feeling exactly the same. At this point I was so glad we had picked a local triathlon for our first outing. The swim took place in Royal Victoria Dock by the Excel Exhibition Centre. I knew the dock having swam in it many times before and I think this really helped calm the nerves as getting in the water felt familiar. I knew what the temperature, clarity, etc would be like so there were no nasty surprises.

One fear I had was having someone swim over the top of me, it happened during swim serpentine and it wasn’t a pleasant experience. I decided to hang to the very back of my wave and got myself some space. Once I got going the nerves passed and I felt confident in the water. I had really dedicated a lot of time to swimming in my training and i felt it really paid off. Much to my surprise I was soon cutting through the water, passing lots of competitors in my wave and reaching the wave behind. I felt strong and I really enjoyed it. I came out the water a little dazed and confused at my time (my watch was showing just over 33minutes and I hadn’t expected to swim that quick!) and began the struggle of getting my wetsuit off. Luckily a really kind volunteer unzipped the back for me as I was thrashing about trying to find the pull string. One discipline down and into the first transition. 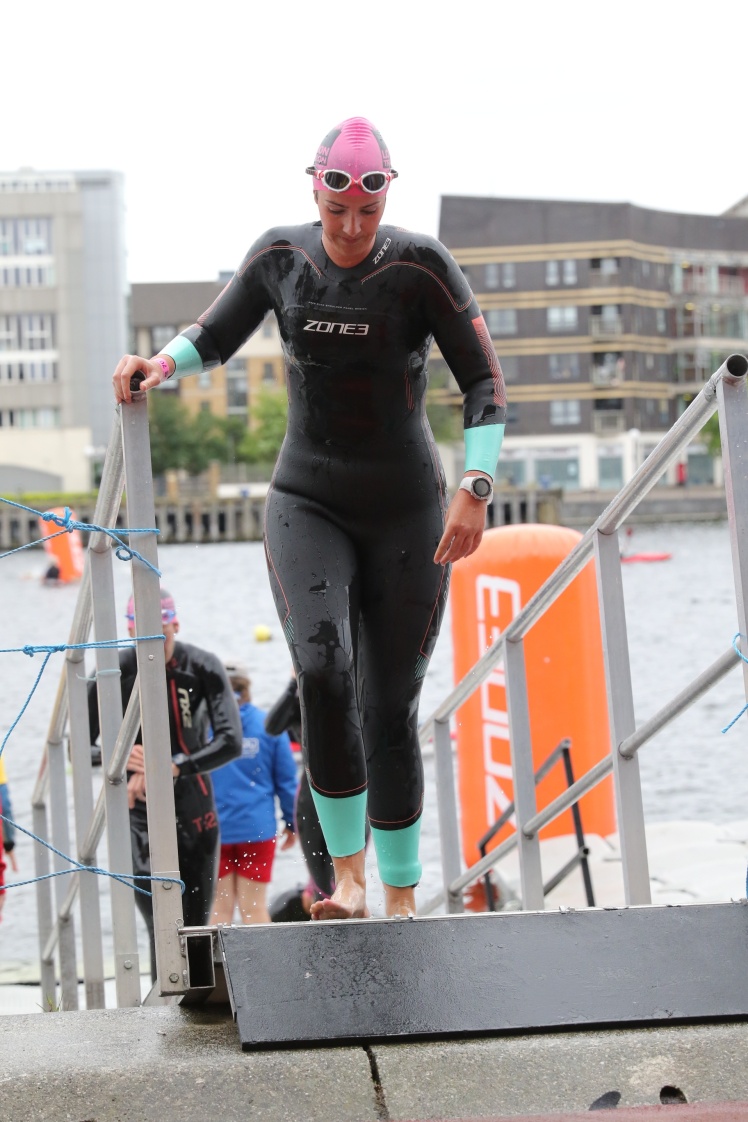 I threw on my helmet, wasted far too much time trying to get socks on (I won’t be doing that again) grabbed my bike and off I went. The ramp out of the Excel felt a tad scary but once I got going it was ok. The headwind was quite brutal but the ride into London along much of the marathon route was fun and flew by. Soon I was heading back to the Excel. The roads on the whole were great, pretty flat bar the odd tunnel and I kept freaking out whenever I went through a red traffic light (kept having to remind myself it was closed roads!). Around the Excel it became a bit sketchy as the surface was uneven. I definitely need to get braver over potholes and there were some tight corners but on the whole a great course. The ramp back up to the Excel is a nasty shock, but get in gear early and it’s fine. The cycle was all a bit of a blur, I had managed to get some carbs in on the bike though which was a huge bonus and helped keep my energy levels up. I was thrilled to finish my 40k in 1:23(ish). Then It was into transition three and what I know best- running!

The running section consisted of laps, so the 10km I needed to run meant running 4 laps of the Dock path outside the Excel. Not very scenic, kind of soul destroying because you have to run past the finish and back out again but not as horrific as I first thought it was going to be. I got into a nice rhythm of sipping water at the aid station and waving at my boyfriend, one of our neighbours who was also competing and Rowena who popped up in multiple places on the course like some sort of ninja cheerleader. It felt a bit like something out of wacky races- we were all looping round catching up to people, chasing others, waving at people as they sailed past in the opposite direction. The laps turned out to be quite fun! 54 minutes later it was over. Crossing the line in style on a red carpet and under spotlights felt very extra, but hey we had worked hard and earned that superstar finish. Three hours and three minutes was my final time, that exceeded every single expectation I had. I got my medal and went to cheer on my boyfriend and the other runners. Then it was time to recover and best of all FOOD!

In all honesty it’s all a bit surreal. I can’t quite believe I’ve done a triathlon. Ten years ago I never could have imagined I would be fit enough to do just one sport let alone three in one go. I’ve loved the variety this has added to my training, and the fun we’ve had along the way. I can’t wait to take on my next triathlon, and I so hope to be back at London next year!

If you’re thinking of trying a triathlon I really recommend it. It’s an incredible experience. Be brave and take that next step!

The event was really well organised from start to finish and it was such a treat to cycle the closed roads of London. There’s even an Olympic plus distance if you want longer on the bike.

The wave starts were well spaced out, the waves weren’t super busy and as a result the swim felt quite civilised (I hope I’ve not been lured into a false sense of security about tri swims!)

I ended up loving the lapped run- but if laps aren’t your thing…good luck with that!

Transition was so well managed, being able to take your bike the evening before is such a great idea.

The volunteers/staff were INCREDIBLE, thank you so much for making the day awesome.

Things to be aware of:

It’s not the most scenic of routes (apart from the Westminster leg of the cycle). The dock water is a bit murky, tastes faintly of jet fuel (city airport is right by here) and the laps of the Excel isn’t the most interesting of places to run. In terms of location on the whole this can’t compete with places like Windsor or a beautiful rural lake or coastal swim, however it doesn’t try to. What it lacks in beauty it makes up for in charm. I loved that it is my local triathlon and it’s just incredible to take part in any sporting event in London, there’s something really magical about competing in the capital.

The road surface round the Excel isn’t great, it’s not terrible but pack a spare inner tube as I saw a few punctures.

There is a small expo at the Excel, it isn’t widely advertised but it was nice to catch up with some of the businesses there and pick up some supplies. Hopefully this will grow in the coming years.

I don’t find their website the easiest to navigate, but you have some excellent communication emails circulated leading up to the event.

2 thoughts on “London Triathlon Race Recap: my first ever triathlon!”