Racing in a new city is FUN, but racing in a city as crazy as Chicago is even cooler. During our recent trip to America we headed to the Windy City for the 40th Bank of America Shamrock Shuffle, a chance to run in my favourite American city. 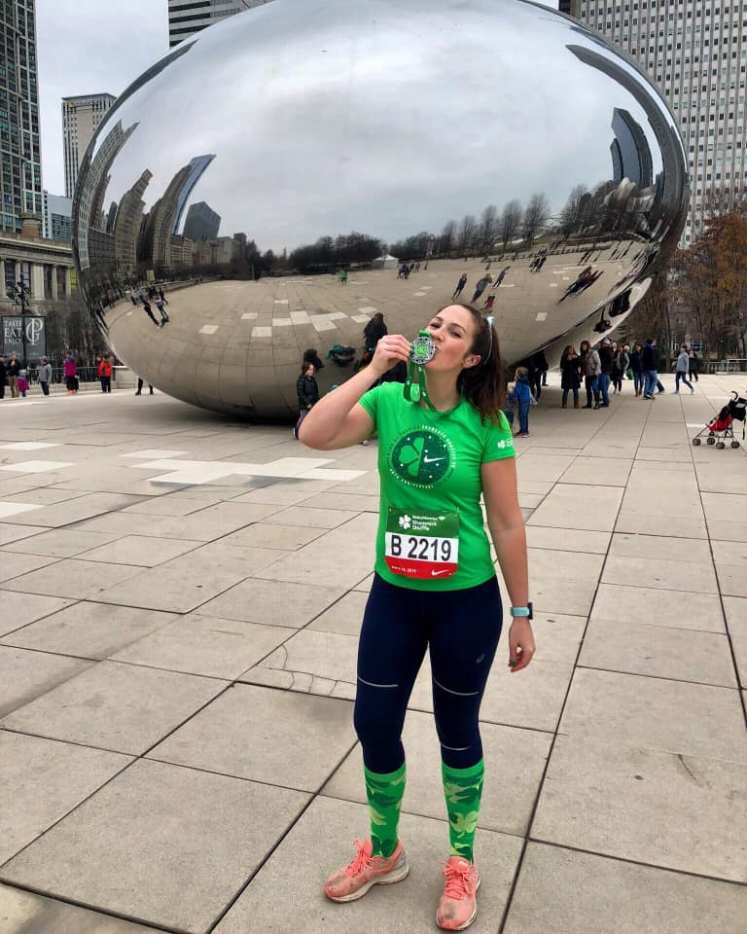 On the 24 March we shamROCKED our way around 5 miles of downtown Chicago starting and finishing in Grant Park. The Shamrock Shuffle is a Chicagoan St Patrick’s Day tradition and what once was a small fun run has grown into one of the biggest races in the city attracting both amateurs and elites. As well as the main 5 mile event there is also a 2 mile walk on the day which takes a slightly different route along Lake Michigan.

The start of the race was hassle free, much like any race in the UK with a secure bag drop and the usual toilet queues. There were two waves, the first beginning at 8:30 and the second at 9am to stagger the runners. In true American fashion we were serenaded with the national anthem before being unleashed onto the course. The route was all on closed roads and as the streets are very wide in Chicago didn’t feel congested at all despite there being over 20,000 participants. We crossed the Chicago River twice before heading into the Loop, running past the The Chicago Theatre, home of THAT infamous Chicago sign and enjoying views of the beautiful Chicago skyline, which architecturally is one of the most beautiful cities I’ve visited in North America, possibly the world! 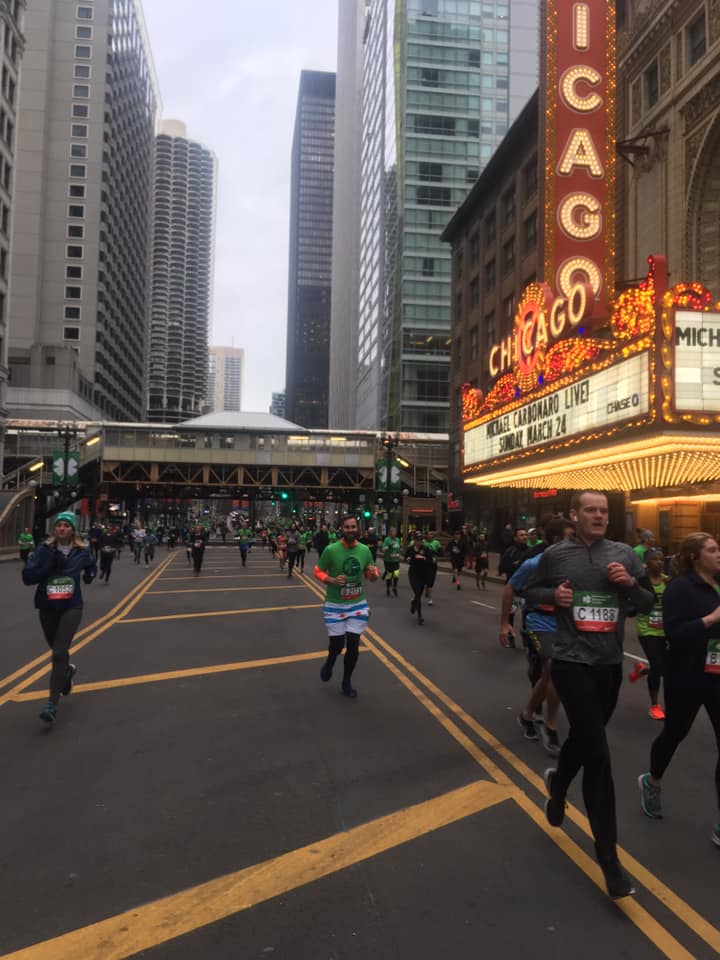 As it was so close to Manchester Marathon I decided not to race hard on this one. I wanted to enjoy the experience and instead woke up before dawn to get a pre race 5 miles on the hotel treadmill. Oh hello last long run before the marathon taper kicks in! As both my boyfriend and I had entered this we decided to run together. Guy is still fairly new to running only having started less than a year ago at 28 years old and this would be his longest ever run. Running hasn’t necessarily come easy to him and he’s had to really make an effort building up the miles and targeted strength training just to be able to run pain free. The aim was to enjoy the race and hopefully secure a sub 60 time for Guy. We set off and the pace was great, we were well ahead of target and I just assumed my garmin was going crazy amongst all the tall buildings but just after 28 minutes it buzzed to say we had covered 5km and as I looked up there was the 3 mile sign (although as we had taken the corners wide by the time we reached it we were already on 5.36kms). I assumed there would be timing mats at the 5km sign I could see further down the road so shouted to Guy that if he wanted the official sub 30 time he needed to attempt a mid race sprint. Suddenly he flew off and left me chasing him, which was a shock to my legs which already had 8 miles in them. At this point he wants me to tell you that he beat me to 5km, and in the Uber to the airport and on our flight to New York he reminded me 17 times.

After our sudden sprint we reigned it back in and settled into our pace, enjoying the views and shuffling along the streets. There are a few sneaky ‘hills’ within the course, the biggest of which was towards the finish in the final 500m but once it’s over you turn the corner and there is the finish perfectly framed against the backdrop of the city. We flew down the home straight, knowing that sub 50 was on! We finished in 49:49- for Guy he achieved his longest run, fastest 5km and took 3 minutes off his previous 5km time. I couldn’t be prouder! And for me that was my last long run of my Manchester Marathon training done!

As usual there were the snacks at the end, cereal bars, water, Gatorade and most importantly a gorgeous medal. You were also given a beer voucher for the afterparty but we both felt hungry so we swerved that and went for pancakes instead!

One thing I loved about the race was the amount of recycling and the attitude towards zero waste. Paper cups were used on the course instead of bottles at one water station and the bottles at the second were put into recycling bins. At the finish there were no bins, instead all bottles and rubbish had to be taken to one of the numerous recycling points. Whilst there still needs to be a more sustainable solution to the amount of waste, particularly plastic, generated by running events it was great to see big steps in the right direction. The race organisers have also made a full sustainability pledge on their website. 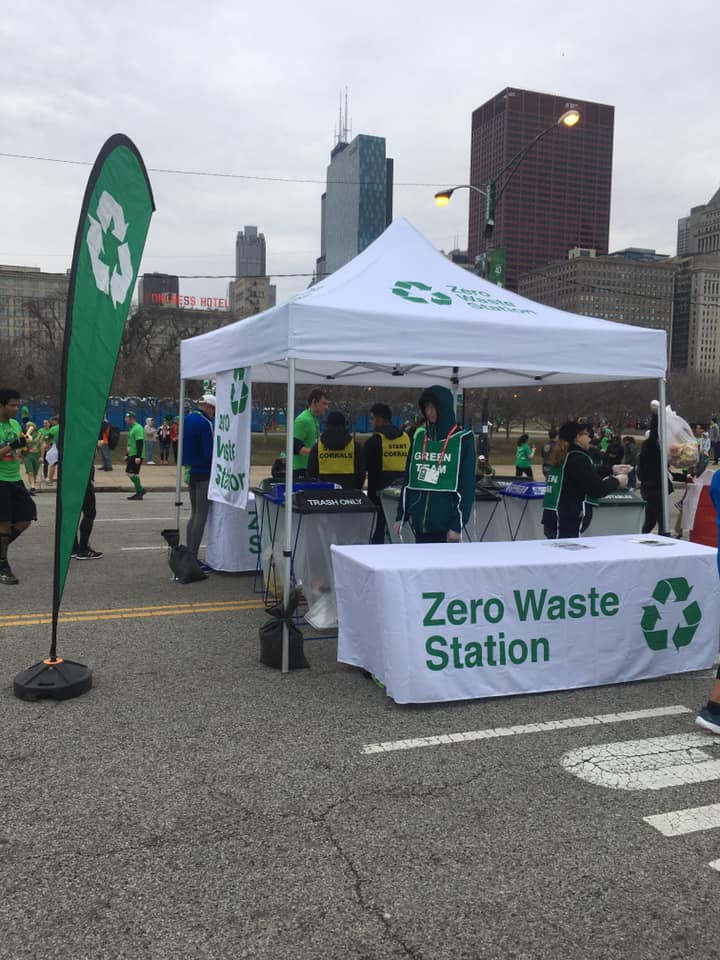 The race fee was steep compared to UK races but reasonable for an American race. We paid $40 which seems standard for races in the US. However this included the medal (these aren’t standard in America!!), a Nike technical t-shirt, bobble hat, limited edition pin, afterparty access and beer and a virtual bag full of vouchers to be used across food, drink and sporting outlets in Chicago (we found this useful for food during our stay). There was also an expo and packet pickup in the two days prior to the race which you must visit to collect your number and offered a variety of stalls where you could collect any last minute bits and bobs.

We really enjoyed our time in Chicago and the race was a real highlight: well organised, great atmosphere and a chance to enjoy running in downtown Chicago without needing to do the marathon! I would recommend it and hope to be back another time in the future.

The 41st Shamrock Shuffle takes place on Sunday 22 March 2020 and more information can be found online.

This post isn’t in any way sponsored, we bought our places and wanted to share what an amazing time we had!