Last August I entered the Ride London 100 Ballot, purely on a whim, then completely forgot about it. My dream to run the London Marathon came true and I threw myself into my training. My life revolved around running and I was loving it. Cycling never crossed my brain, apart from a weekly 30km session on the watt bike as part of my marathon training.

In February I started seeing people posting photographs of their congratulations emails/ magazines confirming they had secured a place in the Ride London 100 event. As I hadn’t heard anything I made the assumption I was unsuccessful and thought to myself, well that is a relief I don’t even own a bike! However two days later I returned home from work and was met wiith a rather unexpected surprise. As I closed the door of our flat I heard a thud- something that fallen out of the letter box. And there it was- my congratulations magazine. I was in.

At first I laughed, the irony of 8 years of disappointment in the ballot for the London Marathon, only to get in first time on a sport I had never tried. Then the reality hit me, sh*t! I put the magazine in a drawer, and didn’t tell anyone, not even my other half for three days as I needed to make a decision about what I was going to do.

The two main issues I was grappling with were: firstly I didn’t own a bike and I wasn’t sure I could afford one; and secondly, I had a massive sense of guilt that I didn’t deserve this place. People tried for years to get in and here I was with a place I hadn’t earned for something I entered on a whim. I eventually told my partner and for the first time ever he thought I was out of my depth. He fully supported my marathon training, but thought this was too much. Too far, too soon.

I waited a few more days, and in that time I upped my watt bike training. I said to myself if I could survive a watt bike for three hours I could start training for this. Somehow after 3.5 hours on the watt bike I made the decision to just go for it. The terms by which you can defer are extremely generous so I thought if it came to the day and I truly wasn’t ready I would transfer my place to 2019.

I live by a phrase that has a lot of meaning to me: ‘Trust the timing of your life’ I think it is so true. Things are delivered to you as and when you need them and fate has a way of giving you the guidance you need. Maybe this was the Universe’s way of telling me something.

With the London Marathon fast approaching I made a decision that all my training would be done indoors on the watt bike. I had already taken a nasty fall earlier in my marathon training and couldn’t afford to add coming off a bike into the mix. I also needed to save up for a bike and all the gear needed for cycling. So twice a week I grinded it out in the gym. 30, 45, 50km, I kept upping the distance and the time on the watt bike. I periodically altered the resistance to try mimic going up or downhill and I did a mixture of endurance and fast sessions. The cycling was proving to be a great way to recover after a long training run and I could really feel the benefits of it.

The marathon came and went and the weather improved. I began bike hunting and was struggling to find something that was within my price range, would suit a newbie road cyclist and would be suitable for a 100 mile cycle. That’s when I came across Betty my B’Twin Bike. I made the decision to go for a hybrid with straight bars. I didn’t feel ready for a full road bike just yet. My first ride out I was a bag of nerves. I went so slowly, shaking like a leaf and feeling frightened of every bump in the road or corner. I truly thought I was making a huge mistake trying to train for this. Luckily, my other half is into his cycling and he would come out for training rides with me. He would stay by my side, teaching me basic things like changing gears, which gear to choose,  and tackling hills. We would try go out every evening after work, sunset cycles became my favourite part of the day. At the weekend we would head to the outdoor track at the Lee Valley Velopark, or head out of London to Richmond or Surrey. 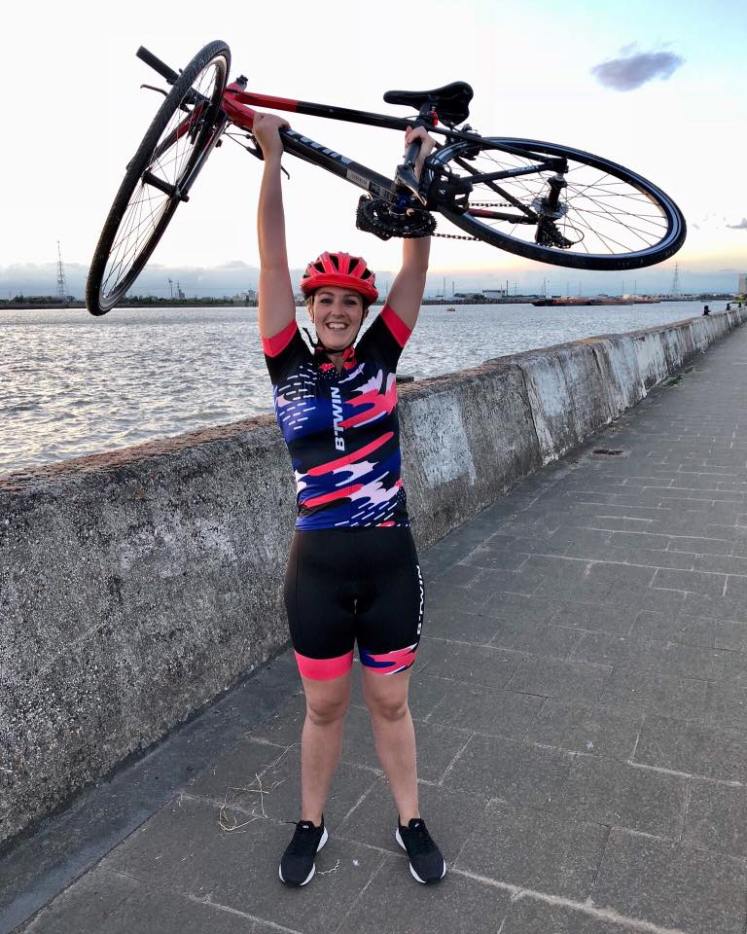 My first attempt at Richmond was simultaneously terrifying and exhilarating. I found being around cars (most of our training prior was on cycle paths) for the first time truly frightening. Some give you space, others really don’t. I thought having previously come from a horse riding background this would be something I was used to, however I soon realised that I trusted my horseriding abilities (albeit on an animal with a mind of its own) far more than my cycling ability. Perhaps it was the fact that when riding I used to carry a crop that I would frantically and angrily wave at any driver who dared come close that made me feel a bit more invincible. However, once I became more used to this, and after a few tears and some very choice words at a man in a BMW who’s wingmirror almost clipped my arm I was flying. I enjoyed tackling the hills the most. In running I hated hills and loved the flat, but when cycling I loved battling up the inclines as I knew a downhill was coming.

The next big challenge were the Surrey Hills. Everyone I spoke to recommended getting some experience of these in, especially the zig zag road at box hill. So one Sunday we headed out of London and gave it a go. After taking a wrong turning and ending up driving down the hill, the fear set in. We could see how steep it was and I could feel how steep it was in the car. As I reached the welcome to Box Hill sign and began the ascent I did not have high hopes. But slowly and surely I turned the first corner, then the second, and the third and there was the café at the top. I had made it. I cried so many happy tears before looping back round and doing it again, just to prove to myself the first time wasn’t a fluke. 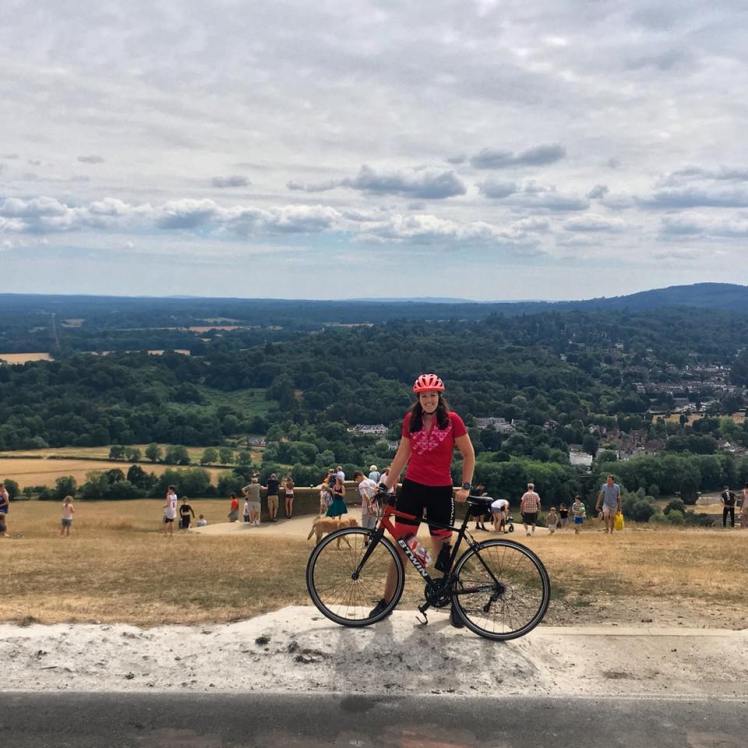 As Ride London approached I had such mixed feelings. I wanted it to be over because I was so nervous and felt under pressure to cycle long distances at the weekends, however at the same time cycling had become such a big part of our lives as a couple I didn’t want that to end. I was also feeling really mixed about the build up. I documented all my training on my Instagram page, however I wasn’t met with anything even close to the support I had for London. Every time I posted a cycle photo I would watch my follower count decrease. People clearly weren’t as interested and engaged in this part of my journey, which was hard to deal with at first, but then I remembered it isn’t about likes or followers and that’s not why I am on Instagram. However it did make my training feel a little bit more lonely and it has taught me a valuable lesson to encourage everyone, whatever direction they’re heading in. My own family forgot I was even riding it, and I chose not to remind them because I was so nervous I wouldn’t finish it and disappoint them.

The weekend soon arrived and I made the decision to just go out there and enjoy it. We headed into London to enjoy the freecycle and I really felt the mall come alive once more, just like it had done at the marathon. I felt as ready as I could be and was excited for the 100 miles ahead. 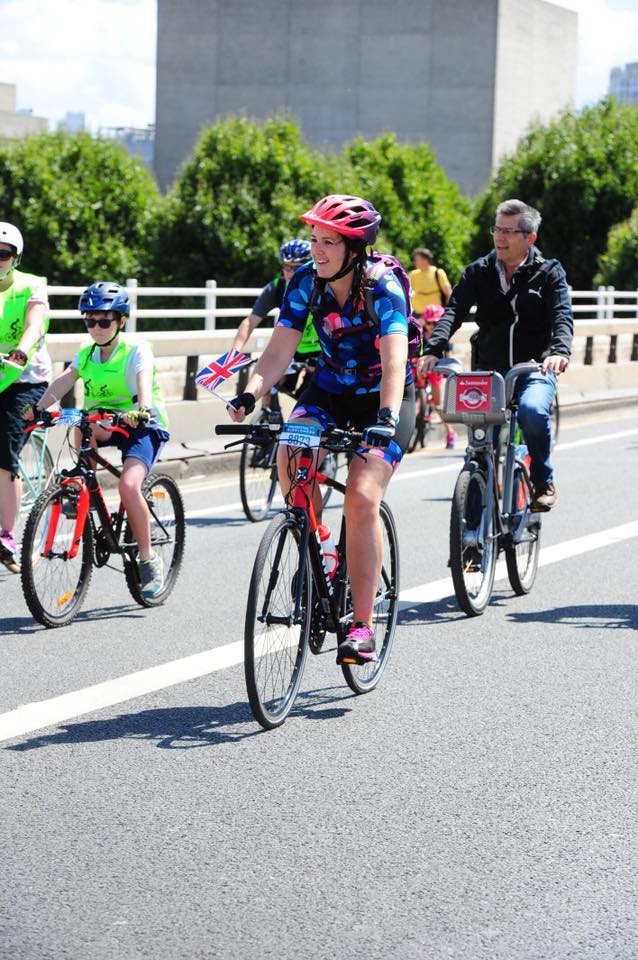